What Is An IVA?

What Is An Individual Voluntary Arrangement?

What Is An IVA, Is It Right For Me?

This section covers "what is an IVA" (Individual voluntary arrangement) and provides a guide to whether you qualify for an IVA as an alternative to going Bankrupt. 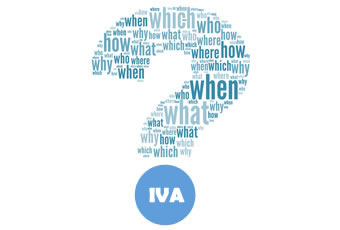 So what is an IVA?

An IVA is short for Individual Voluntary Arrangement.

Here are the basics of an IVA:

Basically it is a contract between you and your creditors, in order to reduce your monthly payments on unsecured debt such as personal loans, credit cards etc. to a more manageable level.

An IVA seeks to protect your family home and other assets like your car from your creditors. It is an alternative to bankruptcy.

You pay an agreed amount each month or week, based on what you can actually afford to pay.

You agree to pay this amount for a fixed amount of time, usually five years.

Once your IVA has been set up, your creditors will agree to freeze interest and will not be allowed to contact you about your debts.

An IVA is often described as an alternative to bankruptcy.

IVAs have to be administered by a licensed insolvency practitioner or IP for short. They are usually a qualified lawyer or accountant.

For the IVA to go ahead, at least 75% of the total value of your debts must agree to it.

If they do, the details of your IVA are filed in court and displayed on a publicly accessible online register, the Individual Insolvency Register.

At the end of the IVA, as part of the contract, and in return for paying back what you could realistically afford each month, the rest of your unsecured debt is legally written off by your creditors.

So after five years, when you finish your IVA, you are debt free.

What are the minimum criteria for an I.V.A?

How do I start an IVA?

You will firstly need to take the IVA test to find out if you could qualify for an IVA. An adviser will then work with you to determine your present financial situation. They will then draw up the proposal which is forwarded to your creditors, allowing you to get your finances back on track.

Are they Government backed?

If you’ve been Googling 'what is an IVA?' then you will have seen some attention grabbing adverts like the ones below, they are all over the Internet.

IVA’s are NOT a government backed scheme - but this is often falsely claimed in the advertising used by some debt management companies.

The Insolvency Service, which is the government department which looks after insolvency, has issued a warning over marketing companies advertising IVAs as Government backed schemes.

The FCA also believes some people are being misled through such advertising and may, ultimately, find themselves being subjected to poor standards of debt advice, typically given by the companies using such false claims.

So if you see an advert or are called by a company offering a "Government IVA Scheme", you should run a mile.

We will help you check an IVA is right for you, before you become the next victim of bad advice, and pushy salesmen.

So to be be clear, IVAs are not managed by the Government.

IVAs actually form part of an Act of Parliament.

They were introduced as a alternative to bankruptcy as part of the 1986 Insolvency Act.

The law governing IVAs forms part of the UK's statute, so they are part of UK law, which is a little different than being a Government IVA Scheme, or Government Debt Help.

If you set up an IVA it will be looked after by an Insolvency Practitioner not the Government.

Our specialists can quickly advise whether you qualify for an IVA. Simply call the team FREE on 0800 368 8133.
Alternatively take the online IVA test and check if you qualify.

What is the cost to setup an IVA?

WARNING: NEVER, EVER PAY AN UPFRONT FEE OR SET UP FEE FOR AN IVA.

Before entering into an IVA, you need to be aware that fees are involved.

The cost of setting up and running your IVA are paid by your creditors to your Insolvency Practitioner (this is the person who manages the IVA process on your behalf) out of the money that you contribute each month.

The costs of setting up and running the IVA should come out of this £7200, not be added on to it.

Basically, your creditors are agreeing to accept less money back in order to pay your IP.

Our Insolvency Practitioners do not charge for our advice and we do not charge upfront fees as we believe this to be unethical. So you will never receive a bill from us.

The only exceptions to this are if you get a significant windfall during the IVA (such as a lottery win, inheritance, or compensation payment) and are able to pay back your debts in full or if your IVA fails. If this happens, your creditors may require you to contribute an amount to cover fees on top of your debts.

IVAs are a great debt solution for tens of thousands of people in the UK each year.

However, entering an IVA has significant professional and legal implications, which must be fully understood before any decision is made.

(freephone, including all mobiles)

No time to talk, we'll call you back.

Have A Question?
Ask an expert now.

Need IVA advice? Our team of experts will send you their answer by email within 1 working hour.

I Contacted them at 5 pm on a Thursday night,they arranged a meeting Friday morning with all the relevant bodies their because my case was the following Monday .I can't sing their praises high enough they contacted the courts same afternoon. Fantastic response, I avoided bankruptcy on the Monday and was given time to arrange an Iva. I risked losing my home,my mother and fathers home all hope seemed lost until I made that fateful phone call. I can now sleep at night.

You can also get free impartial debt advice by following this link to the Money Advice Service.

The ATN Group provides insolvency solutions to individuals throughout the UK; specialising in IVAs, CVAs, Liquidations, Protected Trust Deeds, Bankruptcy, Sequestrations. We do not administer or provide advice solely relating to debt management products, such as Debt Management Plans or Debt Payment Plans under the Debt Arrangement Scheme. We only provide advice after completing or receiving an initial fact find where the individual(s) concerned meets the criteria for one of our insolvency solutions, therefore, all advice is given in reasonable contemplation of an insolvency appointment.